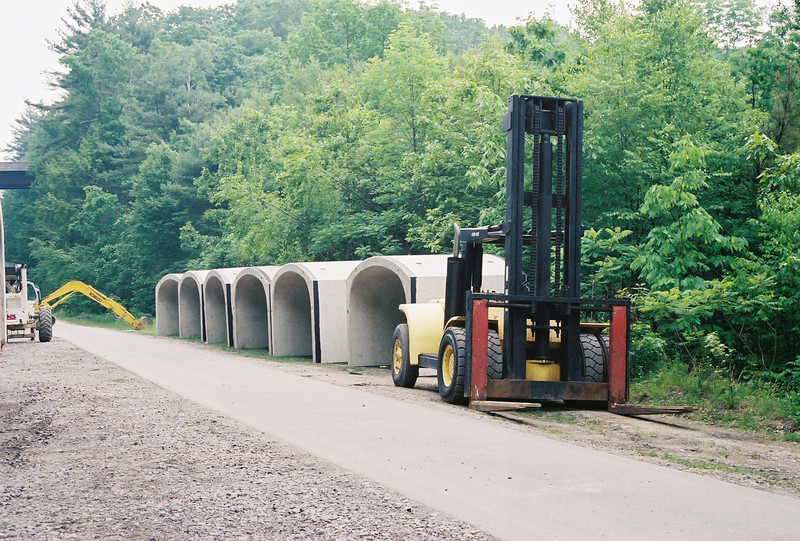 The Allegheny Valley Trails Association (AVTA) cleared out their area's local stock of used tires and started shipping in more, in order restore the historic Sandy Creek Tunnel, which was first built in 1907. The saga began in 1991, when AVTA accepted a donation of 19 miles of the Jamestown, Franklin & Clearfield Railroad (J, F&C), which included the crumbling tunnel. The Sandy Creek bicycle/pedestrian trail was developed on either side of the tunnel, leaving an unsafe passage for the many pedestrians and cyclists passing through it each day. AVTA developed some solutions to fix the tunnel, but came up against budgetary problems, and also had to meet conditions attached to its "historic structure" status, deemed by the Pennsylvania Historic and Museum Commission. So, AVTA turned to used tires, and cut the cost down to $2,000,000, including $803,000 in TE funds.

Beginning in March 2005, workers began constructing a new 13-by-12 foot concrete tunnel inside the existing 30-by-30 foot one. Old tires were placed between the two tunnels to create a liner or cushion, protecting the inner tunnel. Jim Holden, president of the AVTA, credits Wexford Consulting Group of Wexford, Frank B. Taylor Engineering of New Castle and Shingledecker's Welding Inc. for making the concept a reality. "It's quite a project," he said. "It draws attention to the beneficial reuse of tires." Holden estimates that about 250,000 tires were reused in the project.

The Sandy Creek Tunnel, which is also known as Mays Mills Tunnel or Deep Valley Tunnel, was honored by Rails-to-Trails Conservancy (RTC) and the American Society of Landscape Architects in the category of Innovative Designs that Address a Particularly Difficult Challenge.