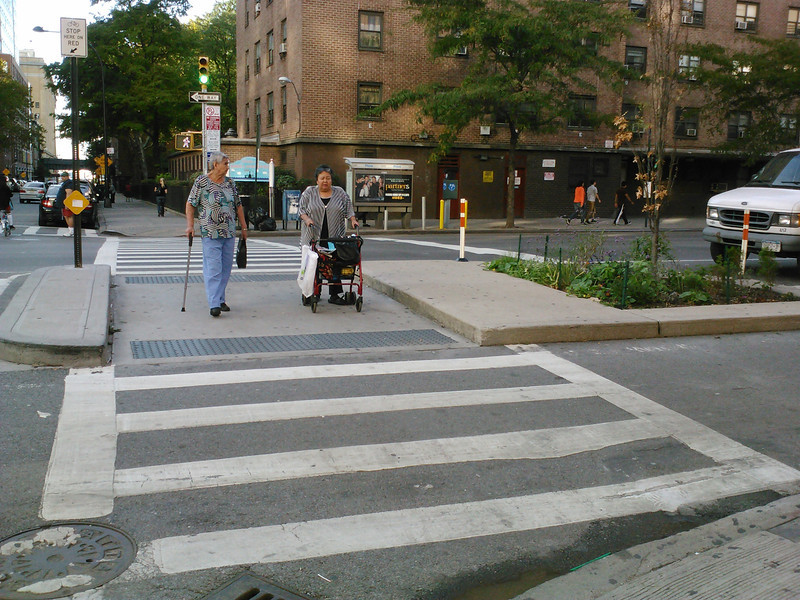 These pedestrian shelters make crossing the street safer, easier, and less stressful for pedestrians who need more crossing time than allowed by the signal timing. A major reconstruction project on Ninth Avenue in New York City, New York used $2 million in Transportation Enhancement funding to build separated bicycle lanes and to enhance the surrounding streetscape. The TE funding was matched by $14,700,000 in other funds and was used for the project which stretched from West 15th Street to West 23rd street. The project funded the reconstruction of 9th avenue and included the installation of new sidewalks, narrowing of the roadbed, landscaping, and pedestrian refuges. The main change was the addition of a physically-separated bicycle path which is one of the first urban on-street parking and signal-protected bicycle facilities in the US. The project has increased the safety of bicycling on the 70 foot wide avenue because the physically separated lane has an 8 ft. buffer of raised concrete islands or a parking lane. Additionally, pavement markings, signs, and discrete signal phases were added. The project won the 2008 Best Program Award from the Institute of Transportation Engineers Transportation Planning Council.