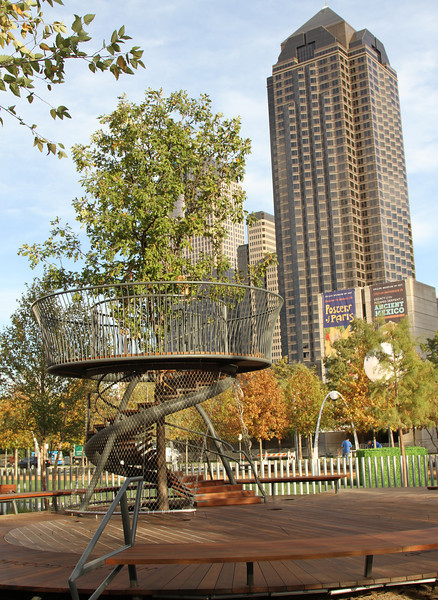 Highway spur 366 is an 8 lane freeway which first opened in 1969 and runs through downtown Dallas, TX. Although the large free was sunk beneath ground level, it presented a major obtrusion to walking around downtown Dallas. In 2002, John Zogg rallied support behind an idea to build an elevated park above the freeway. In 2004, the Woodall Rodgers Park Foundation was founded and a $1 million grant from the Real Estate Council helped to pay for feasibility studies. An addition $1 million was donated by Texas Capital Bank along with another $1 million from the founder Jody Grant.

In 2009, construction of the elevated park began and was completed by October 2012. Using $110 million in public and private funding, the bridge came to fruition. The funding included $20 million in Transportation Enhancements funding as well as $16.7 in Stimulus TE funding. The park was designed by Jim Burnett, the Office of James Burnett, and Jacobs Engineering Group, Inc.. The design and construction of the park was managed by Bjerke Management Solutions. The Texas Department of Transportation selected Archer Western as the contractor for the construction of the deck which consisted of 300 concrete beams and was built to match the street level. Finally, McCarthy Building Companies, Inc. was constructed all of the amenities and added the finishing touches to the park.

This truly unique park features tons of amenities. Nature is brought into the urban core with botanical gardens, 37 different native plants, and 322 trees which line pathways throughout the part. Interested in sports? Well, the park features areas for bocce ball, ping pong, foosball, and even features a putting green! Want to bring your dog? There is a dog park which even has dog training classes on the weekends. There is also a kid?s park right next to the Dallas Morning News Reading & Games Room where you can borrow any number of books. There is free Wi-Fi through the park too! Finally, there is a pavilion for concerts, theatre, and dance right in the middle of the park! Throw in benches, lighting, beautiful walkways, and even more amenities and you have a world class park created from previously unused space!